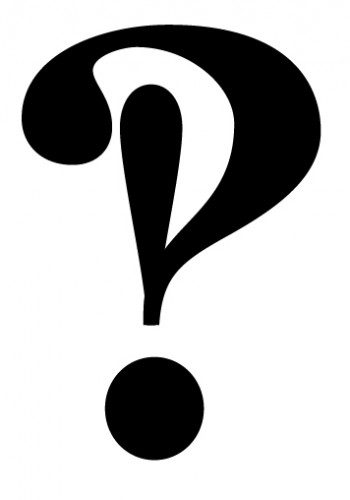 Ah, that much maligned, hated on, non-punctuation mark, the combined exclamation point and question mark, the interrobang. One of my favorite marks of punctuation, it is not accepted as standard.

“What?!” You may exclaim wonderingly, but, much to your dismay and chagrin, there is not a punctuation mark to express your feelings adequately. The only way, currently, is to use a question mark followed by an exclamation point. Or the other way around, but this, in fact, is not acceptable in formal writing circles, either. Alas and alack-the-day, double punctuation is a no-no, also.

In 1962 there was a man with an answer. Martin K. Speckter, an advertising executive who wondered what it would be like to be able to ask the ages old questions, “What? A refrigerator that makes its own ice cubes?” using a mark that more adequately conveyed the meaning. But it never really caught on, even in refrigerator advertising.

Later on in the 60s an interrobang key was added to Remington’s Rand typewriter. Now, instead of typing an exclamation point, backspacing, then typing a question mark over the top of it, there was one key. This, too, was doomed to fizzle out by the early 70s.

I can’t recall where or when it was that I met the interrobang but I do remember thinking how useful something like that could be. When I thought of it again it was the computer era. But don’t fear, it is included in the Wingdings 2 font in MS Word and there is also a way to do it in Apple as well. I don’t know either of those methods very well but, there is a website that can help you out much easier than all of that. I discovered a site called Qwerty.dev, which has a page that is not only devoted to it, but also makes it very easy to use by cutting and pasting. This page, https://qwerty.dev/interrobang/ even has easy-to-follow instructions on how to use it in Apple or Windows.

In my journeyings down the Information Highway, I did discover something that gave me hope. The interrobang is the logo of the State Library of New South Wales.