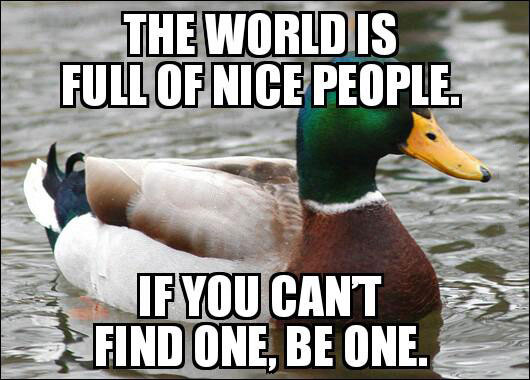 I like to write about nice, uplifting things. I do write about sad or rotten things and I do vent about things that make me mad but really, I like it when I have something good to say. Sometimes a thing happens that makes it easy to do that.

I was at the store and one of the things I needed was some distilled water. For whatever reason, the store was completely wiped out except for four one-gallon jugs at the back of the very top shelf.

I’m between 5′ 7″ and 5′ 8″ tall and I can reach the second shelf from the top with no problem. I can even reach the top shelf if the item is right at the edge. But these were pushed all the way back. In my lightweight younger years I would have just climbed up a shelf or two and swept my hand up there and brushed it to me. I am a full-sized grownup now. The shelves are deep and I didn’t know what to do. I did try standing on the bottom shelf and sweeping my arm up there (living life on the edge, there, I know), but I couldn’t even come close.

For CPAP machines and humidifiers (irons too, but I try to avoid those as much as possible) you really should use distilled water or you wind up with mineral deposits that can damage or at least hamper the workings.

My choices were to go in search of an employee to get the proper ladder or whatever (or use one of those secret tricks employees can use) they might need. I had seen a gaggle of big wig, upper managers, including the store manager, and maybe like a district and/or regional manager but when I walked the store I could not find them. Everybody’s shorthanded these days it seems and there weren’t enough people working so I don’t know if I would ever have found someone. I could drive over to Walmart which is only a couple of miles away but it’s an extra trip, the lines are always long and I just wanted to get home and wind down. This was getting me wound up, though. I could call my son-in-law who’s around six feet tall but why inconvenience him for something so trivial? It’s not like he’s far away but still…

When I came back to the area I saw a man standing there, trying to figure out what to do also. He was about six feet tall. What he did was take the sign, which was basically just a triangularly folded piece of cardboard just sitting on top of the stack, from this display:

He then proceeded to walk around to the backside of the shelf which is higher than the shelf behind it:

He pushed the gallon jug down to the front of the shelf, walked back around, replaced the sign, and grabbed the jug. I said, “Sir, that was really a great idea. I was just trying to figure out how I was going to get the water down.”
“Did you need some?”
“Yes, I did.”
“Let me help you.” And he did. He pushed all three of the remaining jugs to the front where I was able to grab them. I thanked him profusely and congratulated him again on his ingenuity.

I don’t know if I’m tall enough to have successfully tried it and the way things go for me I would have pushed it too far and it would have fallen on the head of some little old lady, bounced off, and broke on the floor. “Wet cleanup in the water aisle!” None of which happened thanks to one nice guy.