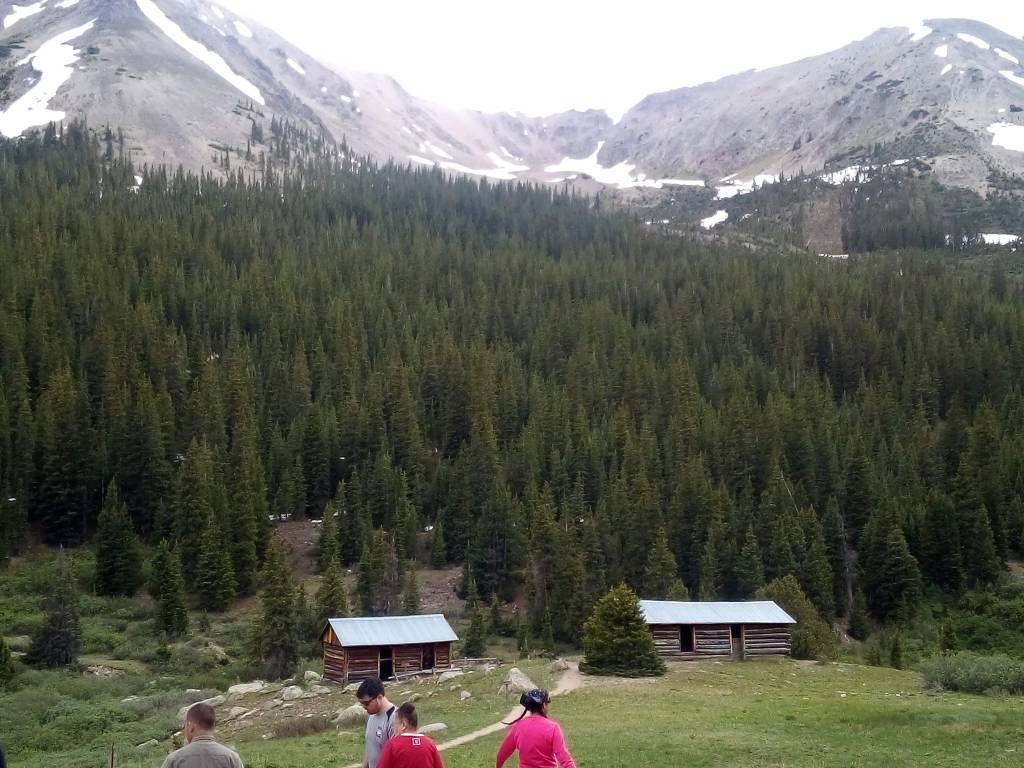 Ever since I was a little kid I always had the impression, maybe from movies and Scooby-Doo cartoons, that when they talked about ghost towns they were completely standing up and the saloon had empty bottles in it and real ghosts haunted the place. Now there are places in Colorado that are set up like that so you can actually see what things looked like and museum-ish places that charge a fee. They are made of authentic stuff usually but many of the well-preserved actual ghost towns are on private property.

I had seen the sign for the Ghost town on the way down and after we had picked up our charges we were happy that they were as enthusiastic as we were about looking it over. I tried to get pictures of the informational plaques and hope they are legible In an earlier post I had typed what the sign said as the caption of the photo but I really can’t do that on all of them. Sorry. There are a couple of buildings that the Aspen Historical Society has restored but the whole thing is actually an archaeological site. It is to the wealthy town of Aspen’s credit that this site is preserved. I’m including this link to Google Maps because the satellite pics when you zoom in show a lot of detail that my ground pics miss. I know sometimes the links to maps don’t seem to work for me but here is the link: Map.

I did a screenshot of the aerial view because I think it’s cool that you can see where the places are or were.

Honestly, I don’t know what I was expecting. Please accept my apologies for the poor, sometimes mixed-up pics, in advance. When I took them I just knew I wanted to preserve the memories for myself and our photo screensaver. I will try to organize it a bit as I go.

Below we have J.B. Conner’s Boardinghouse and Theo. Ackerman’s Hotel. The hotels were more upscale and expensive, meant for travelers passing through. Boardinghouses were more permanent and since they were usually run by families they did not offer alcohol like the hotel did. An ad for Theo. Ackerman’s “Independence Hotel, Independence Gulch, CO,” said, “First-class Accommodations, Good and Clean Beds. Stabling and Horse Feed.” I expect that Mr. Conner didn’t advertize. After a hundred and fifty years they aren’t much different.

One of the things that struck us was (obviously not including the restored buildings) the way the structures were made. There are some that seem to be built a lot more solidly and have lasted, at least in part, all of these years while others are nothing more than depressions in the ground. You can see the difference in these pictures. They all didn’t have placards or names and some just said, things like, “Miner’s House.”

Food storage was interesting to learn about. We had originally thought this circular object might be a cistern or something like that but no, it was for storing things that needed to be cool. Some people just dug a hole in the ground under the floor and stuffed things like fruits and vegetables under it.

This building that is very neatly restored was in the business district. They called it the General Store although they aren’t really certain if it was that or something else. It is the attended place where you can make monetary donations or purchase various books about Colorado History. It also housed a large and interesting number of artifacts. Well, they were interesting to me, anyway.

I didn’t see any ghosts or anything like that but I did have a feeling I don’t know if I have words for. As I stood in some of these places I wondered what these people’s lives were like. Why did one craft a house that would stand for 150 years while another just slapped something up and another lived in a tent? Who were they? I mean, we know some of their names and there are old photographs but what sort of characters and personalities did they have? They had to be tough, living in the brutal conditions they did. What was it like in 1899 when the worst storm in history blocked off all supply lines and you and 75 others had to decide what to do. Who came up with the idea of taking long slats of wood and fashioning skis out of them and then skiing 15 miles to Aspen? And all the while making light of it, calling it a race of the Hunter’s Pass Ski Club, entry fee one ham sandwich. A ghost might have been easier to figure out.

This is the review I left on Google about it:

Situated near Independence Pass and visible from the road, this well-preserved ghost town was in really good shape, thanks, I am sure, to the Aspen Historical Society. It is a lot of walking at 12,000+ feet, but you can learn about the history of the mining boom. It’s also interesting to see how some people built homes and other structures that have lasted 130 years while others are rotted and gone. How much care was put in the building of some.
It probably deserves 5 stars but it is fairly strenuous if you are a flatlander or person with asthma. I’m glad we were able to to see it, though.