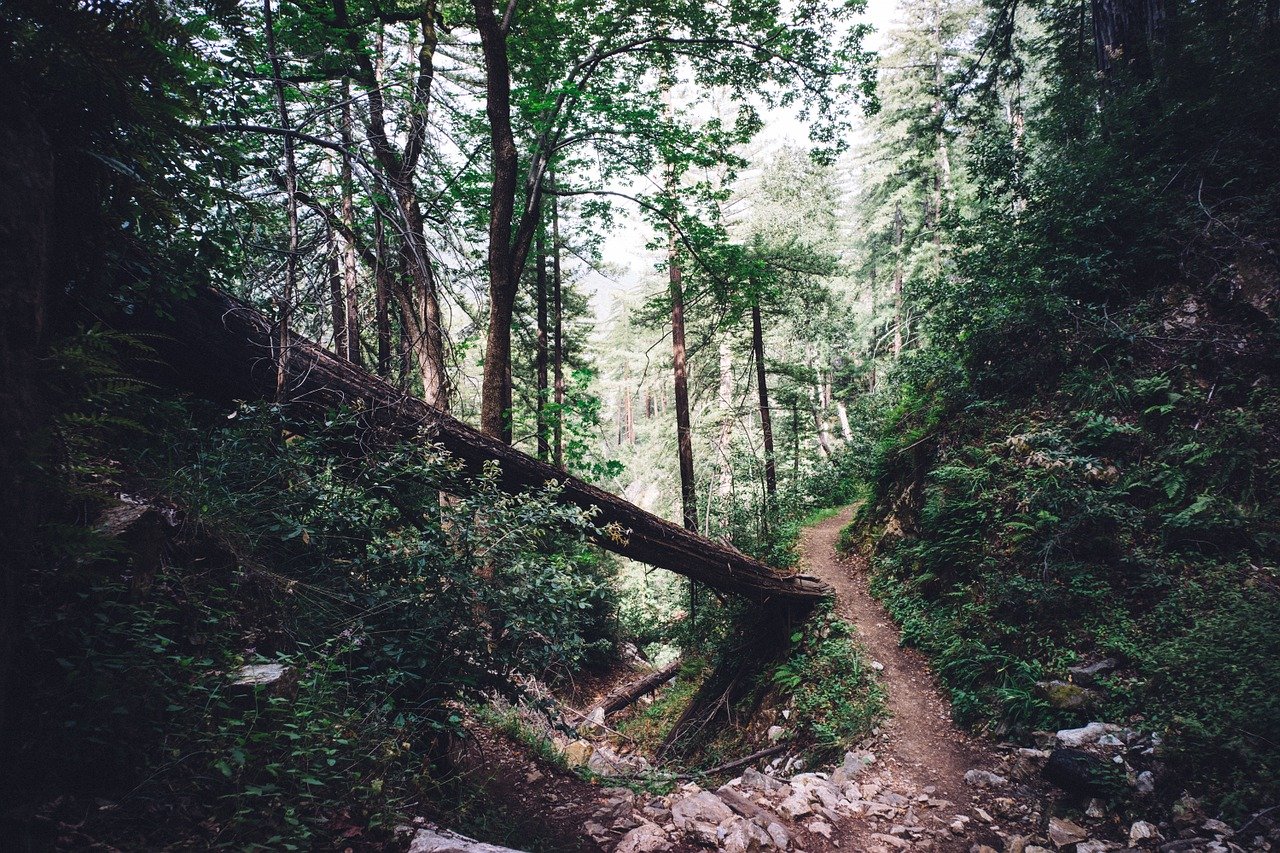 I visited a new blog today, simply named Ellie894, presumably after the author. I haven’t delved into it too deeply, and as with any other link that goes off my site, it seems obvious that I would not have any control, good, bad, or ugly, over their content. That being said, she has stopped by here a few times and commented or liked a few posts, so I went to go read her stuff. Very poetic with beautiful pictures that caught my eye.

One item on her New Year’s post was that as she was walking her dog down a trail she regularly follows, she saw a wine glass perched in a tree. Purposely hung there on a branch. Very strange. she left it be, which is what I would have done in a situation like that. It stayed for a year and then it was gone. It wasn’t even my experience, I had not seen it and yet it captured my imagination, like a writing prompt. I changed the nature of it to fit my style.

I don’t think I could tally up the number of times I have walked up and down this trail at different times of day. I was not the only one who ever used it, but it was kind of out of the way of the general tourist population so mostly just locals traveled it. It was kind of a back way between the suburb and the town and between either place and the national forest. If you walked softly and didn’t go thrashing around like a tourist from Chicago, you could often see wildlife of different sorts. The time of day that you go is the deciding factor of what you might see.

A thing that I didn’t expect to find was a bottle in a tree root.

The snow had recently melted and I couldn’t tell how old it was or how long it had been there. I had never seen it before. It was wedged in fairly snugly, but was that growth of the tree or had someone just wanted to make sure it was secure? I unfastened it and looked it over. There was no indication of age, other than the fact that the glass did not bear a name and the label was gone. I saw there was a piece of paper inside. It had been rolled up at one point but was not going to just fall out of the bottle on its own. I turned it over and shook it and was able to get my pinky finger in just enough to catch it.

My heart beat fast and I felt nervous, even though I wasn’t doing anything wrong, I just felt…awkward. Like I was opening someone’s mail or something. Still, it was exciting. In a flowing, perfect cursive handwriting, written with a fountain pen, was a simple poem.

As I said, I have been up and down this trail at all different times of the day or night and there had never been any kind of clandestine meeting, let alone a tryst of any sort. At least not at this spot. I replaced the bottle as carefully as I could and made a tiny mark so I could tell if it had been moved; and I wondered. Every day I walked by at different times of the day. It was hidden well enough from the casual observer. A jogger or a teenager going to the woods to do something illegal or a bicyclist would not notice it.

For over a year I watched the spot. Winter snow, spring rain, summer heat, fall chill. Every day, it was there, unmolested. Unmoved. I realized how silly I was, of course. That bottle could be over a hundred years old or could have been…well, anything, really, but it gave me a…feeling…I don’t know, like, there was something I needed to see or witness or hear or know and my curious nature could not let it rest. But after time I began to grow weary of it. It was like watching Poe’s grave, hoping to catch the person who left the rose.

New Year’s eve I couldn’t sleep. I am not a drunken party person and my few friends were either in bed already or out with other, more entertaining friends. I took a stroll in the bright moonlight and as I came around the bend I saw two figures standing in what looked to me like a warm embrace; and one had the bottle in their hands! I gasped and my heart palpitated and I didn’t know what to do. Should I walk right up to them and ask? Should I seemingly stroll by casually and pretend not to notice? Should I stand still and wait until they moved, then try to follow them?

The question answered itself as they both turned toward me and waved for me to come on. I had already determined that it was a couple but when I got up to where they were, I was shocked to see that they were both quite elderly. I mean, it was unsafe for them, I’m not even sure how they made it at all.

“Hello there, young man. Thank you for preserving our bottle and putting it back where you found it.,” the man said.

“Oh, yes. You have been such a wonderful guardian of it this year.”

“I’m so sorry. We have not been introduced. I’m Horace and this is Henrietta.”

“Pleased to meet you, I’m sure.” I have dealt with old folks in my time and have learned not to try to rush them, even though I had a hundred questions for them.

“You see, we met in this very spot over sixty-five years ago and fell in love soon after.”

“But our families were hateful to each other and to us,” she said, “and forbade us to talk or meet or anything. Young man,” she looked at me sternly, her old eyes burning, “Never let family dictate your affairs of the heart. But back in those days, you obeyed your families.”

“Last year,” he said, “We decided that since our families were all finally dead now, the last one died last year, that we would start meeting here again, to see if there was still any spark.” He gave her a sly glance that embarrassed me.

“So, we devised this arrangement with the bottle, just in case either of us got cold feet. We knew someone had tampered with the bottle and put it back and decided to have a little bit of a joke at your expense. It was easy to figure out when you would come and go and so we timed our meetings around when we thought you might arrive. You almost got us once or twice before.”

I was flabbergasted. “But you two are so…well…” Boy, was I rude! But, still, they had to be in their nineties!

“We’re both very spry and athletic and know how to watch our step on a trail. So! Guess what, young man.” They were both beaming and grinning from ear to ear.

“Horace has finally had the decency to pop the question and we are going to be married!”

They were so gleeful I caught it, too. “Well, congratulations,” I said to him and to her I said, “Best wishes.”

“But we do have a favor to ask, if it wouldn’t be much trouble,” said Horace.

“Of course. Anything I can…”

“Would you be my best man?”

4 thoughts on “The Bottle”