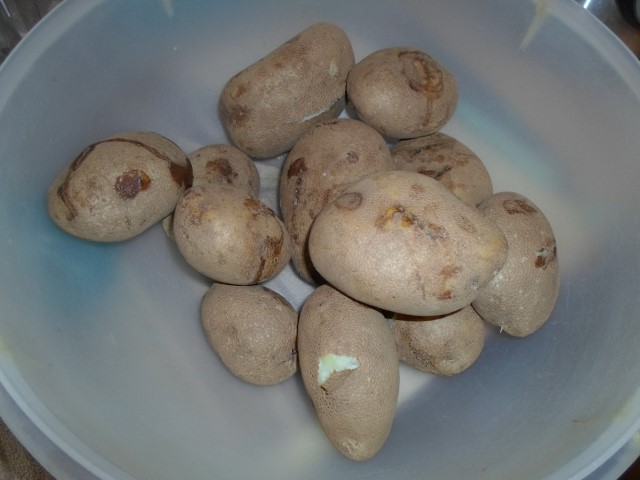 This is a different sort of venture for me but I am going to teach you how we make one of my favorite family recipes. My entry tomorrow, when I complete it, will be serious, so today I wanted to do something different. Ben does a variety of tutorials on his blog and Petra and Lydia do some cooking stuff as well, So I figured I would give it a try.

I can remember my Grandma Thiel and different aunts making this and l have always loved it. Daughter Tabitha helped make this using her Intstant Pot pressure cooker for the potatoes and eggs, stirring up the sauce and just generally providing kitchen guidance. The recipe in its entirety will be at the end. In these steps I am just showing what we did. We were making a double batch.

8 slices of bacon fried crispy brown. These are when I first put them in the pan.

It calls for 8 medium sized potatoes, boiled in the jacket. The potatoes we were using weren’t of a consistent size so there were a few more. Boiling them in the jackets is important. It’s called pellkartoffeln in German. My dad used to talk about his grandfather, the one who escaped the Kaiser and came on the boat to become a U.S. citizen and that’s where I got the term, although I had to look up the spelling. In his later years he would ask my Grandma what was for dinner. If she’d say, “pellkartoffeln and herring” the old man would spit and say, “Pooey! Pellkartoffeln and herring! We had that in the Deutschland!” Growing up I don’t ever remember being served what I later learned was either a herring dip or pickled herring. My Grandma and aunts never made it when I was around if they made it all. Anyway, there are a number of reasons to boil potatoes in the skin and that’s what the recipe says. They are supposedly easier to peel but I am not sure of that. You have to peel them and dice them.

When the bacon was frying we decided that we needed a couple of more slices. After all, is there such a thing as too much bacon?

Then the boiled eggs.

We only used 4 of these.

2 stalks of celery, chopped up.

Something didn’t look right at this point. “You doubled everything else, did you double the potatoes?” Oops. This was where the Instant Pot was really helpful. We put on some more potatoes while we did other things.

10 strips of bacon, fried crispy and chopped up. Leave it all in the bacon grease. We discovered, over the years, that the bacon grease was a key ingredient. shortcuts like pre-cooked bacon and vegetable oil just don’t work for this. If you want it to taste like my Grandma’s.

Pour the sauce into the bacon and grease and set a timer for 10 minutes, stirring it to thicken.

The additional potatoes are done. The peeling of boiling hot potatoes is quite the adventure, in case you were wondering.

The sauce is boiling and ready.

Pour it over the potato/egg/celery/onion mix in the bowl. Toss lightly (don’t stir it, dad), making sure it is all mixed together thoroughly.

Make sure dad gets a portion to taste and make sure that it is good and non-poisonous. It can be eaten warm or put in the refrigerator. If you put it in the fridge it gives the flavors time to mingle and get to know each other beforehand. So there is a big, Tupperware size V (if anyone understands that. We used to call it Grandma Pike’s breadmaking bowl) bowl in the refrigerator waiting for tomorrow.

As a boy, my aunt would serve this with smoked sausage and sauerkraut. and German chocolate cake for dessert. The only difference we’ve made is that we use kielbasa instead of the smoked sausage but I can’t tell you what the difference is myself.