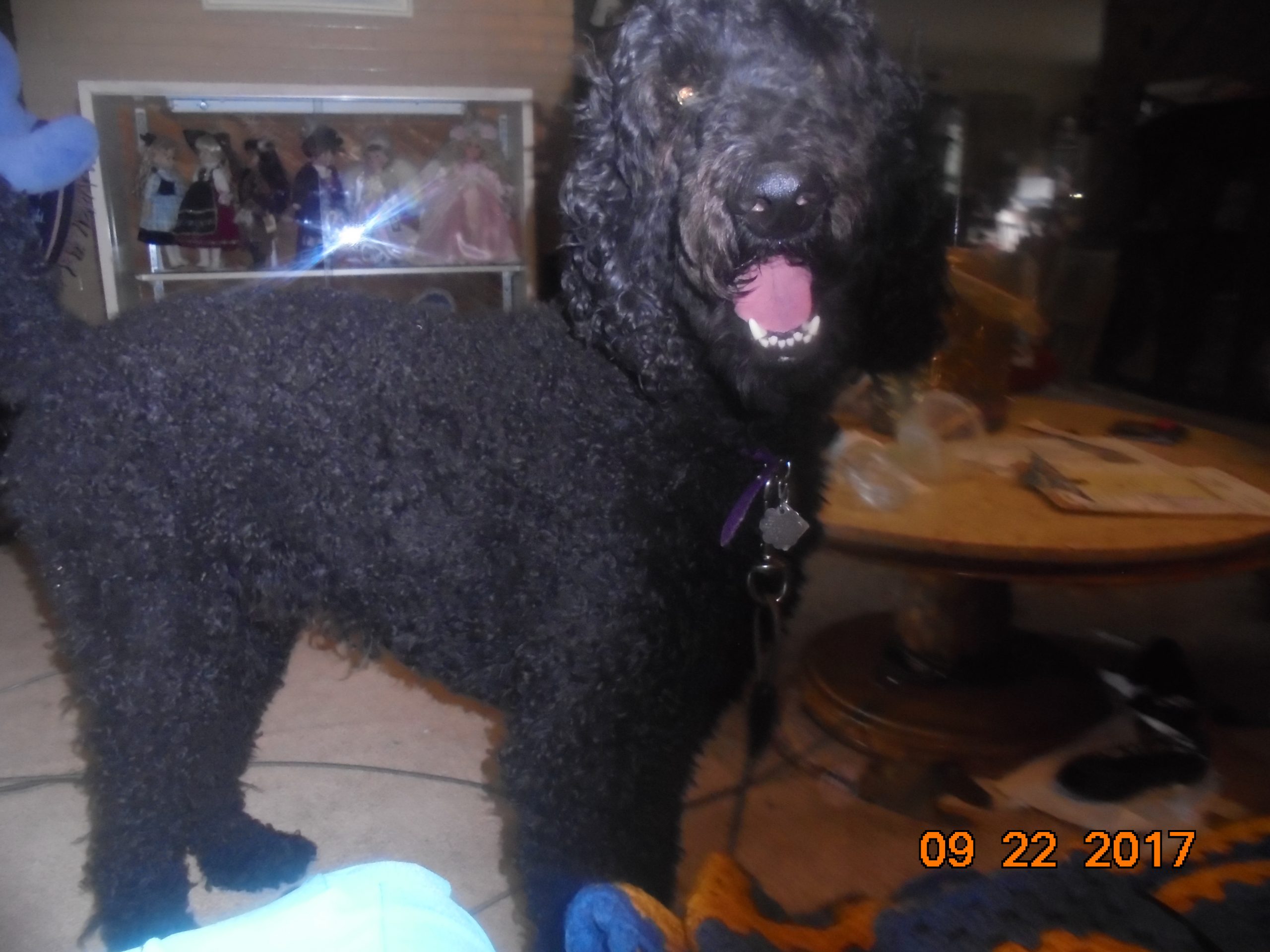 Ever since I committed to putting something up here every single day, there have been days when I have had nothing to say and/or no time to say it. There are a couple of posts that are in the works, but I don’t want to rush them. If I rush them I will not do them right. Sometimes, even when there seems to be a lot of time to work on blogging, there are interruptions of life. A ten-year-old, an eleven-year-old, a 4-month-old, and a 3-year-old poodle make for a fun and interesting group. The older ones can pretty much take care of themselves with a little guidance, but the other two require more attention.

The poodle is kind of the wild card. A lot of times when people think of poodles they think of miniatures, but this guy is a purebred standard poodle, a royal standard poodle to fanciers but this size is only recognized in the poodle world. He weighs 80 pounds and is 31 or 32 inches tall and is on the list of smartest dog breeds at number 2, just behind Border Collies. I looked at several lists and the first 3 were always, in order, Border Collie, Poodle, and German Shepard. Middle daughter bought him to be a service dog when she was so sick because along with being smart, they are hypoallergenic. God healed her a few days after she picked him up but when we adopt a pet it becomes a part of the family and we don’t just get rid of them.

It seems that our pets’ names have always come from Old Time Radio shows and this guy was named after Mr. Palladin’s valet, Hey Boy. The problem with some dogs is that they are too smart. Once he learns a thing, he finds a way to circumvent the system, so to speak, and not do what he’s told, even though he understands exactly what you want. It’s as if he gets bored and wants a new mental challenge all the time. He has a puzzle toy that holds treats in different compartments and he has gotten to the place that he solves it based on which compartment has which favored treat.

We subscribed to Bark Box because their toys have all stood up pretty well to his playing. He can completely destroy a Dollar Store toy within the day you buy it and toys from other places don’t fare much better. That was our original reason. But now when it comes, he always knows it is his box, whether there are a bunch of boxes stacked up with it or by itself. He would likely have destroyed the glass case in the living room the other day because we had put it up there to wait for him to open it. It’s kind of a show, now, watching how long it’s going to take him to get the box open and get his new toys. We’re going to video his next unboxing and send it to the company and likely share it with you guys.

Anyway, he knows how to get what he wants, even if it means learning to open the back slider door with his paw. No, his foot, not his dad. Daughter has his dad and mom’s name on the papers she got with him but apparently, if a dog has been neutered or spayed they are no longer allowed in competition as the supposed purpose of an animal show is to evaluate breeding stock. This practice, in my opinion, is really hypocritical in nature, because one of the best things you can do for a pet, especially dogs and cats, is to have them neutered. All puerile, anthropomorphic joking aside, it makes for a happier, healthier animal. But his pedigree no longer counts. They claim that all dogs have the intelligence of a 2 or 3-year-old, and if you think about all the things a toddler can figure out and do, you will understand the challenge he can present.

All that being said, he is part of the family and one of the grand-dogs, so he is a keeper. Actually he is very affectionate and loves the little kids that daughter takes care of. He is very gentle and patient with them and allows the littlest ones to do things that would probably cost an adult an arm and a leg. Literally, not figuratively. He is a big guy and when he saw the roofers on top of the neighbor’s house he lunged through the front window. The $300 plate glass window. Surprisingly, miraculously, he didn’t injure himself. He does find ways to injure himself however and has cost daughter a lot of money in vet bills which are little adventures in their own right.

Remember, the Good Book says, “Whoever is righteous has regard for the life of his beast, but the mercy of the wicked is cruel.”

5 thoughts on “This Blog Is Going to the Dogs”