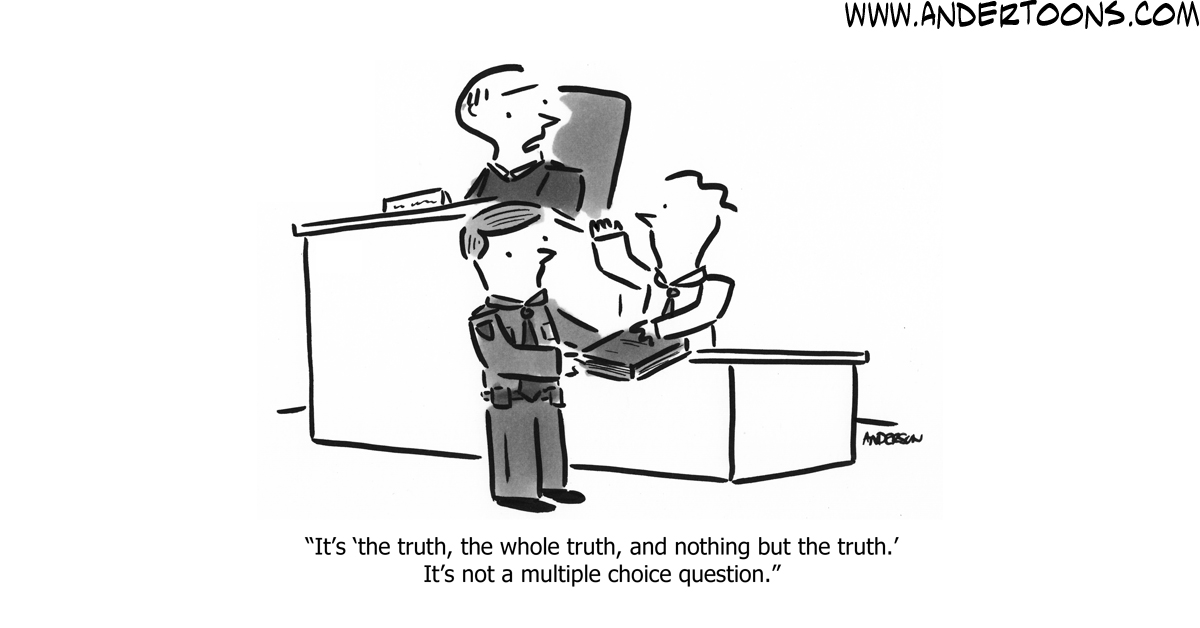 Mat 5:33 – 37 Again, ye have heard that it hath been said by them of old time, Thou shalt not forswear thyself, but shalt perform unto the Lord thine oaths:
But I say unto you, Swear not at all; neither by heaven; for it is God’s throne: Nor by the earth; for it is his footstool: neither by Jerusalem; for it is the city of the great King. Neither shalt thou swear by thy head, because thou canst not make one hair white or black. But let your communication be, Yea, yea; Nay, nay: for whatsoever is more than these cometh of evil.

Not long ago this scripture came up in my reading again and I got to thinking about what it actually means. I wondered if there was a little more depth to it. I mean, there are times we have to make a promise or a commitment. There are times when we have to make a declaration of something. If you are a witness in court you swear to tell the truth, the whole truth and nothing but the truth, so help you, God. But some people don’t — won’t — do that. Some people will affirm that that is what they are going to do, but, because of what Jesus said, they won’t swear.

But is this what He really meant? What is the difference? You are still promising either way. Either your word is good or it isn’t and that was how I always understood letting your yeas be yeas. You are supposed to be trustworthy and honest, especially if you claim to be a disciple of Jesus. At our school (Our school the church has anyway. I can’t speak for public schools. I grew up saying it in school, but the times have changed, haven’t they?) we have the children say The Pledge of Allegiance to the flag, the pledge of allegiance to the Christian Flag and the pledge of allegiance to the Bible. A pledge is a promise. We give our word that we will be loyal to the Flag and to the Republic and won’t be divided from our fellow citizens, under God.

When I joined the Army, I swore an oath, saying, ” I, Herbert Thiel, do solemnly swear that I will support and defend the Constitution of the United States against all enemies, foreign and domestic; that I will bear true faith and allegiance to the same; and that I will obey the orders of the President of the United States and the orders of the officers appointed over me, according to regulations and the Uniform Code of Military Justice. So help me God.” And there again, they give you the choice to say, “I do solemnly affirm.” None of that ever bothered me, or even crossed my mind, because by making such an attestation, that you will be loyal to the flag or support the Constitution or tell the truth in court, you are binding yourself to your word. To me, binding yourself to your word is, in fact, letting your yeas be yeas.

But it still stuck in my craw and wandered around in my thoughts every time I would hear it and I would wonder if I wasn’t missing something. We can all remember hearing people saying things like, “I swear to God, I’m gonna…” or “By God, I’ll…” I have also heard, “I swear on a stack of Bibles it’s true…” How about, “Honest to God…” or “God as my witness?” And many other such-like frivolous sayings. Why did it grind on me so much when I would hear it?

It interested me enough that I started to look up a few things. To find out what the real deal is or was. I started with the biggest oath I ever took (The Wedding Vows don’t count under this situation because Jesus defined them separately), the oath of enlistment, and learned some things. It wasn’t hard to find the official Army history of the oath. According to history.army.mil it started out on June 14, 1775. The first oath, as part of creating the Continental Army, read, “I, ____, have, this day, voluntarily enlisted myself, as a soldier, in the American continental army, for one year, unless sooner discharged: And I do bind myself to conform, in all instances, to such rules and regulations, as are, or shall be, established for the government of the said Army.” Here again we see he is binding himself to his word.

It went on to say that on Sept 20, 1776, the Congress established the oath as, “I, _____, swear (or affirm as the case may be) to be trued [sic] to the United States of America, and to serve them honestly and faithfully against all their enemies opposers whatsoever; and to observe and obey the orders of the Continental Congress, and the orders of the Generals and officers set over me by them.” There it is again, now. Swear or affirm?

Well, according to Black’s Law Dictionary (Louis L’Amour fans will recognize this book as one that Orrin Sackett and some other characters read), an oath, in the broadest sense, includes, “…All forms of attestation by which a party signifies that he is bound in conscience to perform the act faithfully and truly.” And he goes on to say that some groups, such as Quakers, will make affirmation but won’t swear, but that their asseveration is still binding upon their conscience. The further I dug in, I learned that an oath invokes a higher power. In other words, you are asking God to look at your words and listen to you and you are saying that you agree to be judged and placed under nonhuman punishment and judgement. This differs from an asseveration, like an affirmation or declaration, which is, “The solemn or emphatic declaration or statement of something.” It is still binding upon your conscience, but does not call upon God to judge you. The upshot of it all is that, if you swear an oath, you are invoking the presence of God and He will expect you to keep the vow that you have promised.

There are several vows and oaths in the Old Testament and rules governing their use. A famous one that came to mind while I was pondering on this was the story of Jephthah. He swore to God that if he helped him in battle that he would sacrifice the first thing that came out of his house. He won the battle and his daughter, his only child, came out to meet him, dancing and singing. While the Scripture does not describe what happened or what he actually did, and commentators are divided, I believe those that say that she was set apart to serve God and never to marry, leaving Jephthah without a legacy. We know he did something and did it right because he appears again in the Hebrews chapter eleven, the “Hall of Faith.” God hated the abominations of their neighboring countries and definitely hated human sacrifice. Anyway, his actions were a show of faith in both God and his vow to God. His conversation with her shows the seriousness of the matter: “Alas, my daughter! thou hast brought me very low, and thou art one of them that trouble me: for I have opened my mouth unto the LORD, and I cannot go back.”
And she said unto him, “My father, if thou hast opened thy mouth unto the LORD, do to me according to that which hath proceeded out of thy mouth…”

So, I guess the question is not whether I should solemnly swear or affirm but whether or not I should take my own word seriously or not. Jesus said to let our yeas be yeas and our nays be nay and not to swear by God or anything else, which, I guess in more modern vernacular might be, “Say what you mean and mean what you say.”

Now, the only caveat I would put on deciding whether to swear or to affirm is that most such oaths contain the phrase, “So help me God.” I see this as a prayer to God that he would help me keep whatever vow or oath or asseveration (asseveration has the same root as the word severe) or affirmation or pledge or promise I make. Help me God, I ask, to be true, not only to my word, but to Your Word as well.

Oh. To answer your question. From now on, I will probably make an affirmation and not swear with an oath.