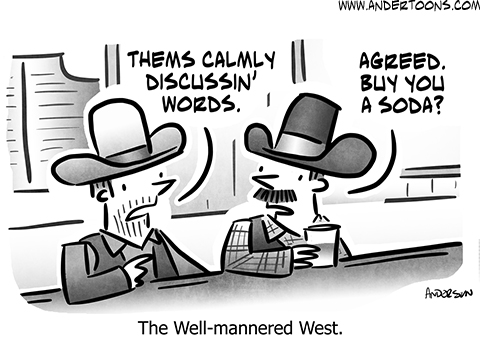 This is a rewritten expansion of a piece I originally did on 02/04/08. Also, please remember that I will be reposting some of my old stuff to their correct dates as well, resulting in multiple e-mails.

Zane Grey wrote a book called “Code of the West,” which portrayed how men in what is commonly called “The Old West” ought to live and act and behave themselves.  He never outlined an exact list of rules and regulations but you could tell what his characters believed by how they acted.

One of the strangest and most annoying things to me is city people who move to the country and then whine about how much better they had it in the city.  I used to ride the bus with an annoying little guy from Los Angeles who always had something negative to say.  “Back in L.A., the buses were never this slow.”  Or “They think they have crime here, back in L.A. the gangs…”  “I couldn’t believe what I heard about an ambulance getting stuck in a snowdrift on a dirt road and they won’t get it out until Tuesday!”

Finally, I couldn’t stand the guy anymore.  We were usually the only ones on a certain part of the ride, and even if I sat in the back with my face toward the window and my nose in a book and didn’t answer, he would still grouse out loud.  “Back in Los Angeles it never snowed and got cold like it does here.”  And that was the day I turned around and said, “IF EVERYTHING WAS SO MUCH BETTER IN LOS ANGELES WHAT IN THE WORLD ARE YOU DOING HERE?!?  GO BACK TO LOS ANGELES, ALREADY!!!”  And yeah, I did use my “cap-locks voice” to say it.  I was tired of it.  And do you know what the guy told me?  He actually said, “Oh I couldn’t stand the big city anymore and moved here to get away from it all.  I just didn’t expect it to be so small-town and rural here.”

But really, his problems are not as unique as you might think.  He was actually part of a group of people that are migrating here to get away from the big city (And IMHO ruining the place for the rest of us) and live the rustic, rugged life of the pioneers.  Except that the people who settled out here did without a lot and still do without a lot.  Now, just because you decided to honor us with your presence by moving here, doesn’t mean that we will necessarily appreciate the honor right away or even in your lifetime.

If you move somewhere that doesn’t have a paved road, it’s likely not going to be paved just for you any time soon.  It may not have been paved since the first wagons pulled in here and likely never will be paved.  This could mean a lot of dust in the summer and mud in the spring and fall.  No, that road never gets plowed unless you belong to a property-owners organization and pay your dues in.  Then it will depend on whether the guy that does it can get out of his yard.

There are places in the mountains where phone service is still on a party line and there are no cell phone towers.  Water is pumped from a hole in the ground and sewage is done by a septic or other system and in some areas, the system may be a little shed-like building out back.

Colorado is an open range state.  Don’t know what that means, maybe you aren’t ready to move here yet.  If you don’t want cattle, sheep or other livestock on your property, you are responsible to build a fence to keep them out.  Also, if you hit one with your car, you are responsible to pay for it.  Oh, and if you live in a farming area, the summer breeze will gently waft the smell of freshly mown hay to your nostrils as well as the smell of its byproducts.  You will have to live with this.  Also, farmers and ranchers often work around the clock and at all hours of the day and night so noise and lights will happen out in the fields sometimes.

A few years back a Larimer County, Colorado, commissioner named John Clarke wrote a good piece he called, “Code of the West” and posted it on their county website for anyone who was thinking about moving to the romance and beauty of the West.  Since then it has been re-written by numerous counties, including the county I live in, El Paso County, Colorado. Gallatin, Montana has a fairly extensive and practical one that also explains some legal issues people there may run into and ends with a Code of the New West.

The singing cowboy, Gene Autry, developed a code for all of his young radio and movie fans that, by all of the accounts that I read, he also lived by.

3 thoughts on “The Code Of The West”