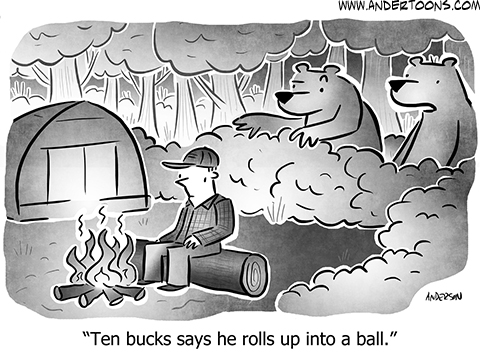 I broke down and bought a new, bear-proof, trashcan. I got so tired of picking up his trash that I bought this very nice one on Ace Hardware’s website. It was also the least expensive one I could find that was certified bear-proof. A lot of our trash fits in one and it has been knocked down a couple of times.

Most of our nasty, icky trash fit but there was one bag that someone put in the normal can. So, what happens is something that looks like this:

And that was just one bag of trash. This would happen to both trash cans at least a couple of times a week. Full.

But what happened with the bear-proof one? Well, the first couple of times he just knocked it to the ground. This time, however, I think someone was mad because it looks like he threw it across the driveway and under a tree.

But I have to say, it worked like a charm and I didn’t have to pick up after Mr. Bear.

4 thoughts on “The Bear Returns to a New Trash Can”