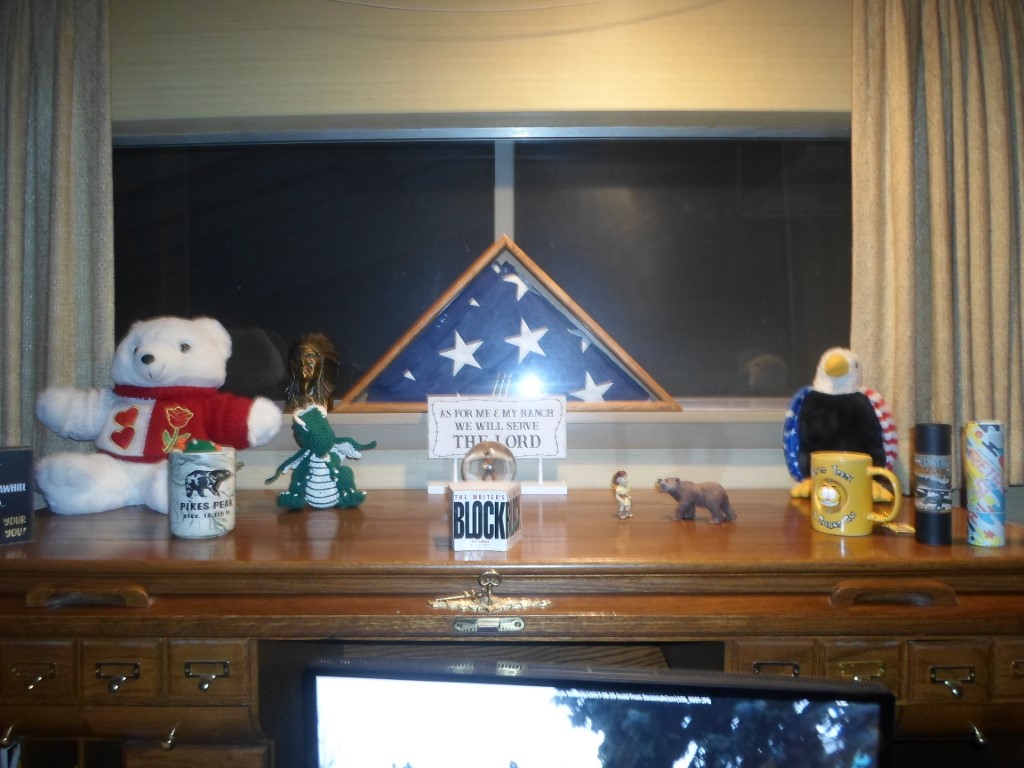 This is the “final” desktop arrangement.

The first item I am going to talk about is this teddy bear whose name is Miss Glenna. It had never had a name and tonight I decided to call her Miss Glenna.

My wife has been a home-care CNA for a lot of years. Almost more years than she has been alive. Actually, she was a caregiver long before anyone ever gave her a license, she was just able to do more stuff after that. She has a knack for dealing with difficult clients. The agencies she worked for would often wind up giving her their “problem children.” It could be somebody that was mean and hateful to the world and she would go in with her no-nonsense, this-is-a-professional-visit and this-is-how-things-are-done demeanor and the person would realize they were dealing with somebody different. She wound up warming up some of the oldest, coldest, meanest people by her, “You don’t have to like me and I don’t have to like you but we both want to get this procedure over and done with” approach. They liked her. If the office would call and say she wasn’t coming they would throw a fit. Nobody could figure out how she won them over.

One such client was Miss Glenna. A bitter, cantankerous, curmudgeonly old woman. “If you don’t want to go back, we’ll understand,” said the scheduler. She lived in a beautiful house at the top of a hill in an old and well-established neighborhood. I believe it was the second house built in the sub-division and the architect that made the plans for it only made one other house from those plans and that was up in Denver somewhere. It was all on one level which in later years became important to her. The house was built in, I believe, 1959 and Miss Glenna moved in with her dentist husband in 1960. I probably have some of the details wrong, but it’s close. She was born into the family of a doctor in Illinois and was used to being part of the upper crust of society.

At some point, she divorced the dentist and kept the house. She had two sons and she was a “swim meet” mom. One of her sons set several records at Harrison High School here in the Springs and his name is still on the board there. One of her sons committed suicide later on. That son had adopted two young children who were her grandchildren, except that the wife moved away and she never got to interact with them. ever. She got remarried to an electrician who took good care of her and updated the house in ways that would help her. You can tell by the way a lot of things are done in the house that the work was done by someone who truly cared. He was an awesome man and she was truly in love with him. And then one day he suddenly had a heart attack or stroke and died. She had a lot of books, but then here eyes started failing due to macular degeneration. She had two miniature poodles that she loved and one of them died. Then she got cancer and the physical pain began. After a while, she couldn’t even use her whole house or go outside in the big, immaculate back yard and smell the roses from the bush that had moved with her from Illinois.

Sometimes bitter, curmudgeonly, cantankerous old ladies are the way they are for a reason.

By the time my wife met her, the cancer was giving her a lot of pain. She would lie on the couch in almost the exact spot where my desk is now and sometimes couldn’t muster the strength to go to bed. My wife took care of her for almost five years (I think) and learned a lot about Miss Glenna. More than most people knew. She didn’t have very many close friends although she did have a couple of good neighbors. Margaret would listen. And Margaret would work. She would take care of Miss Glenna’s house and belongings as well as her personal needs. Sometimes the old lady would be shocked by the care she took and Margaret would talk to her about how beautiful the house was while she cleaned it.

Sometime during all this, it was decided that I could go and get her prescriptions for her. She was addicted to Red Bull and so I would go to Sams and get her a case of Red Bull and pick up her prescriptions. After a while, we wound up taking her to her doctor’s appointments as well. And she would have me come in and visit with her as well. Now, while all this may sound almost maudlin, our conversations were anything but. She would carry on about how wonderful and awesome my wife was and how lucky I was to have her and how she worked so hard. “She cleans and takes care of this place just like it was her own. I don’t know if I cared for it myself as much as she does.” She would sit on that couch, smoking like a chimney, and talk about all kinds of things while Margaret worked. She knew a few bawdy bar tunes that made my ears turn red as well. She may have grown up being in refined and educated company but somewhere along the line she picked up a little different education also. She sang me a song about leprosy one time (Which I’ve never heard anywhere else, even on the Internet) that just cracked me up. You had to be there.

Her house was decorated all over with stuffed animals. Now, I have a thing that I do with children who carry around a dolly or a stuffed toy that makes people smile and usually endears me forever to a kid. I will gently, carefully, very respectfully pick up the thing and hold it up to my ear and make little whispering noises as though the bear was talking to me and telling me a secret. I nod and I say to the youngster, “He (or she) says that you are a very nice person and they love you very much.” It creates a great moment and can be a terrific icebreaker. A lot of kids will just eat this stuff up and expect you to do it every time you see them. So will little old ladies.

One day I was visiting with her and right in the middle of our conversation I interrupted her and turned toward this bear that was sitting in a little chair and I did the whole picking-up-the-bear-and-making-it-talk-to-me routine. Well, I bugged my eyes out and made some shocked gasps and exclaimed things like, “No” and “Did she really?” and at one point I looked at her all shocked and said, “Glenna!” All the while Miss Glenna was laughing and shaking her head and telling me I was a fool or a dummy or something. But she liked it and it became our “thing.” If I learned she wasn’t doing something the doctor had told her to, I would work that into the routine as well.

A short time after she had passed away we drove by the house and saw her son’s truck and a big dumpster in the driveway. I got a lump in my throat and my eyes started leaking and I just said to my wife, “Ask him for the bear.” Thankfully they were just getting started on preparing for the estate sale. He had more than that on his mind though. His mother had instructed him that, no matter what, he was to find or make a way for us to get her house. He loved us, anyway, especially my wife, for the way we had treated his mom. He knew, “She wasn’t always easy to get along with.” He discounted the price by a giant amount, maybe fifty to eighty thousand off, and floated the loan for us himself until we were able to build up the credit to get our own loan.

And I got to keep the bear.