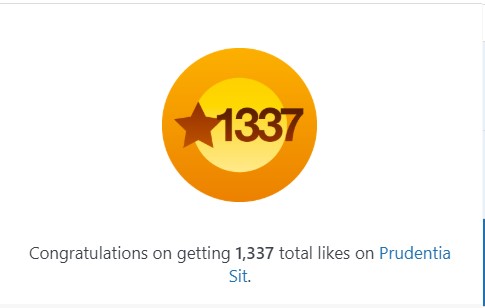 Yep. That’s me! Hahahaha! As if I believe Word Press. But they did award me with this cute little graphic.

I did a brief search on the internet for 1337 and found this:

leet
/lēt/
Noun
noun: 1337
an informal language or code used on the Internet, in which standard letters are often replaced by numerals or special characters that resemble the letters in appearance.
“she communicated in secret using leet”

adjectiveINFORMAL•US
adjective: 1337
(of a person) skilled at computer programming or hacking.
“the 1337 hacker was rerouting phone calls”

This is high praise because I and not skilled at either programming or hacking. The truth of the matter is more like this cartoon (Which I have permission to use except it needs “likes” in it to make it complete):