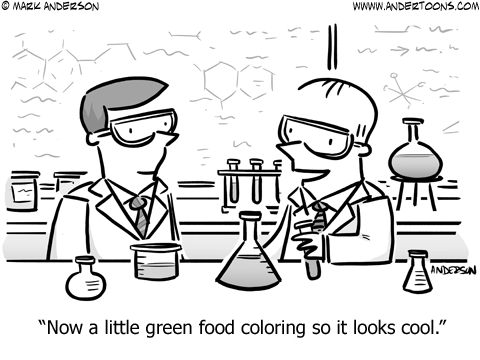 I have been writing vignettes, articles, opinion pieces, poetry, and whatnot since before I ever had a typewriter, word processor, or computer. The advantage of the computer is that, if you are a pack-rat like me, you save all kinds of things. The original title of this piece was “Scientists” and written 12/01/2002 which is a couple of years before I started blogging. I don’t remember the person I had the conversation with that’s quoted in the piece below but that’s probably just as well.

This has always been kind of a peeve of mine, scientists who should more correctly call themselves theorists. Scientists who believe in evolution (and it is a belief system, just like Creation) cannot go back and observe the Big Bang any more than I can go back and watch God speak it all into existence. I know the King James Bible is the Word of God for our modern day and can see the creation through Scripture. I know God is real because I sought Him out for myself and have had a personal experience with Him. The problem that so many of these “scientists” have is that, if they admit that there could be a God, then they would also have to seek Him out and find out what His Divine Will is and how to obey it.

If you want something other than evolutionary explanations, try a site like Ken Ham’s Answers in Genesis and look at some other ideas. In the meantime, you can read my piece below. I have since learned more about bees and their flight and while it is true that if a bee flew like an airplane it wouldn’t be able to but their flight is more complex than that. I think for my next Curmudgeonly Monday I will write about Christians who propagate myths and urban legends as fact.

Remember, the Good Book says, “O Timothy, keep that which is committed to thy trust, avoiding profane and vain babblings, and oppositions of science falsely so called:” (1Ti 6:20 KJV)

120102 – I pulled out The American Heritage Dictionary, Third Edition, to look up the word, scientist.  They define a scientist as, “A person having expert knowledge in one or more sciences, esp. a natural or physical science.”  I am sure it should include remarks about one who learns by observing and by using the scientific method, which is, “The systematic procedure for scientific investigation, generally involving the observation of phenomena, the formulation of a hypothesis concerning the phenomena, experimentation to test the hypothesis, and a conclusion that validates or modifies the hypothesis.”  Since I had the dictionary in my lap, I thought about the word hypothesis.  The first two definitions are, “1.  A tentative explanation that accounts for a set of facts and can be tested by further investigation; a theory.  2.  Something taken to be true for the purpose of argument or investigation; an assumption.”

I looked this word up this morning because I was told by a young woman that she does not believe in God or religion because she is a “scientist.”  She did not say it in all lower case letters, either.  She said the word scientist in all capital letters in a bold, italicized, calligraphic font that was about size seventy-two.  She said “god” in a basic Times New Roman font about size six.  “Surely, you have used your scientific powers of deductive reasoning to determine there is no God?” I asked, but she had not.  She had not developed a hypothesis to test and she did not even realize that a phenomenon exists for her to observe.  She did not want to hear about any either.  She had not tested anything, either, but she had her conclusion!  Yes, this person who claims to be what another dictionary defines as a member of a discipline, which would, I suppose, make her a disciple of science, had already made her conclusion without any independent observation.  It was impossible to discuss the matter further with her as she had no hypothesis and had not intended to get one, either.

This saddened me; because there appear to be too many “scientists” like this.  They are full of preconceived hypotheses handed down by professors who have never tried to determine for themselves whether they are valid.  This person has never talked to someone whose two-year-old child was cured suddenly and inexplicably from an inoperable cancer.  She has never spoken with an alcoholic that lost his desire for alcohol, not through years and steps, but instantly in a couple of hours.  Yet.

The problem with many people is not that they do not want to know whether there is a God or not it is that they do not care.  They use science, falsely so called, as a crutch for their own weaknesses of character.  They do not want to observe the aerodynamically unstable Bumblebee in its impossible flight and seek to hide the fact that the nucleus of the atom contains positive and neutral charges, which should suck the orbiting electrons in.  They would rather accept the preconceived hypotheses of their professors and their professors before them, than to challenge themselves to observe a phenomenon independently lest perchance they be forced to agree at least with Hamlet, “There are more things in Heaven and Earth, Horatio, Than are dreamt of in your philosophy.”