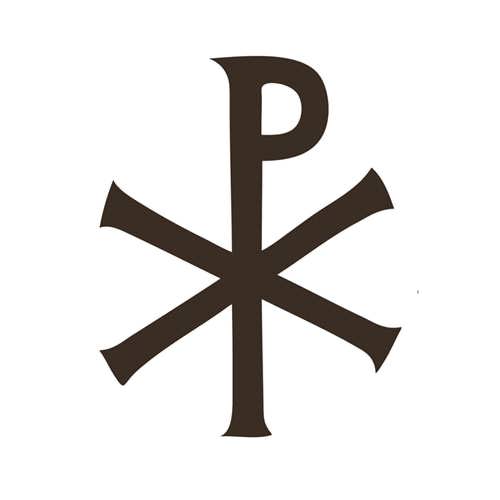 Wait! Wait! Back! Put the torches down! Ouch! Watch out with those pitch forks! They’re pointy! Stop! Let me explain!

Okay. So. (phew!) Here’s the deal. The X in Xmas has been there since the year 1021 AD. Actually, before that, but it was an abbreviation by some Aglo-Saxon scribe, XPmas. Those letters, X and P, relate to the first two letters in the Greek Spelling of Jesus Christ. Apparently, around 312 AD, Constantine instructed his men to Scrawl the letters on their shields.

Before Constantine it was part of a Greek acronym, of all things. Those things on the backs of people’s cars that I call “Jesus Fish” contain it sometimes. The transliterated Greek word, “ICHTHYS,” which means “fish” in English, becomes an acrostic. I’v copied and pasted the actual letters here but I can’t remember where I got this particular copy. This information was all over the internet, really. ΙΧΘΥΣ stands for “Ἰησοῦς Χριστός, Θεοῦ Υἱός, Σωτήρ” which, in transliterated English, becomes, “Iēsous Christos, Theou Yios, Sōtēr.” This translates into, “Jesus Christ, Son of God, Savior.” So, that Χρ in the second word are the letters chi and ro. This is where the scribe got started sticking in the Xp-mas. Now there are many other, far more scholarly sites out there that can define all this further, but, I wanted to get to the part where, by and by, we see that the X is the abbreviation of Christ. The X was used doubly as a symbol for Christ and also for the Cross.

So, since we can show, almost from the beginning, the the X and Xp were used as abbreviations for Christ, is it a big deal that modern day Mad Ave and merchants in general use the abbreviation? Is this really a part of what has been called by many, “The War on Christmas?”

This is a matter of definitions, I think. Is there a definite, palpable, attitude in the advertising/merchandising world and in government, that is anti-christian? Oh, I think so. There are so many groups out there who don’t just disagree with Christians, but actually hate them, it would not be possible to list them all, even if I knew them all. So, if the question were, “Is there a war on Christianity?” well the answer would be 2,000 years old. The thing is, this world and its atmosphere, everything around us, has always appealed to human beings’ lower, baser, carnal nature. The lust of the flesh, the lust of the eyes, and the pride of life have been with us since Eve was tempted and Adam sinned.

Christians are supposed to be seeking a higher level of living and thinking. To be carnally minded is enmity against God. We are supposed to be seeking higher spiritual ground. Christians should be praying for the Holy Spirit of God to guide their minds and hearts as they study and read His word. And therein lies a great problem. Many Christians don’t even really read their Bible and don’t try to understand for themselves what it says. I had one woman tell me, “Oh, I’m afraid to read the Bible on my own. That’s my minister’s job.” “Aren’t you even curious about what it says or if he’s telling you what it’s really about?” “No.”

What this comes down to is that people who identify themselves as Christians often don’t have a good understanding of what their own holiday is about. They are so busy with trying to get everyone the perfect present that will make them love them more that they don’t stop to care about what it means. Their minds are clouded by their often sincere desire to make their loved ones happy and by what Constantine created when he tried to appease the Christians and the Romans and the pagans and have one general religion that everyone could find something to agree on.

Here is the truth. There is only one God. The great, infinite, omnipotent, omniscient and omnipresent creator of all things. He created mankind and by one man, sin entered into the world. To save man from sin required a pure blood sacrifice. Since all humans were born from the seed of sinful Adam, there had to be a new thing happen to reconcile people to God. Animal sacrifice couldn’t do it and there was no human perfect or good enough, whose bloodline was untainted by the sin of Adam.

God, the almighty creator of the universe. The invisible, spiritual being, had a plan to deal with this and show His true glory. A plan that was part of His very self, his very essence and nature. and so God, the great and mighty, unapproachable because of the fallen nature of humankind, King of the Universe, came to live among His creation.

In the womb of a young virgin girl named Mary, he created a second chance for all people everywhere. Instead of the seed of the fallen man, Adam, he created, within an egg of this virgin, a being that would be both human and God at the same time. This shell, this body was the incarnation of this Holy God. No man could see God or approach near to Him, but they could approach this one. Isaiah 9:6 says that His name shall be called Wonderful, Counselor, The Mighty God, The Everlasting Father, and The Prince of Peace. He was the Everlasting Father come to live among His creation. The Father was an invisible spirit but Jesus said, “I am in the Father and the Father in me.” And “He that hath seen me, hath seen the Father.” And “I and my Father are one.” You could not see or touch the Father until His incarnation.

He was tempted in every way that humans can be tempted, but He never sinned. He knew who He was and He understands firsthand our struggles with temptation. Because he lived perfectly without sin and denied the temptations presented to Him all through His life, He could willingly lay down His life as the sacrifice for sin.

His bloody, painful sacrifice on the cross purchased an opportunity to be delivered from sin and be born again as a new creature. The formerly unapproachable, invisible Spirit can now, not only be approached, but can live inside the hearts and minds of His creation.

Now, since all have sinned and come short of the glory of God, you do have to repent of your sins. You have to not only be sorry for them, but want to be free from them, desiring a spiritual life being led by God, rather than being led by the sinful nature of the flesh. You have to want to deny fleshly lusts and seek a spiritual life. When you are baptized in His name, Jesus, you can wash away your old sins and take on His name. You are covered by His blood and your sins go into remission. He will come live inside of you by His Spirit. The same holy Spirit of God that created the universe will come live inside of you, giving you power to overcome temptation. Jesus said, “I am with you but I shall be in you.” This is an incredible, life-changing experience that requires complete and total submission to God. A real desire to change your life and serve Him. When you get to this place, and he indwells you, there comes a power into your life that you cannot explain in human tongue and you will express your love and worship of Him in a heavenly language as His Spirit gives you the utterance, the way they did in the book of Acts when the church first started. It is an undeniable, unforgettable, intensely personal experience that you will never be able to forget.

So. Can Madison Avenue, the entertainment industry, hollyweird, the lame-stream mainstream media or anyone else co-opt that by changing “Merry Christmas” to “Merry Xmas?” HAH!

You just have to remember what the season is about.

One thought on “Merry Xmas!”