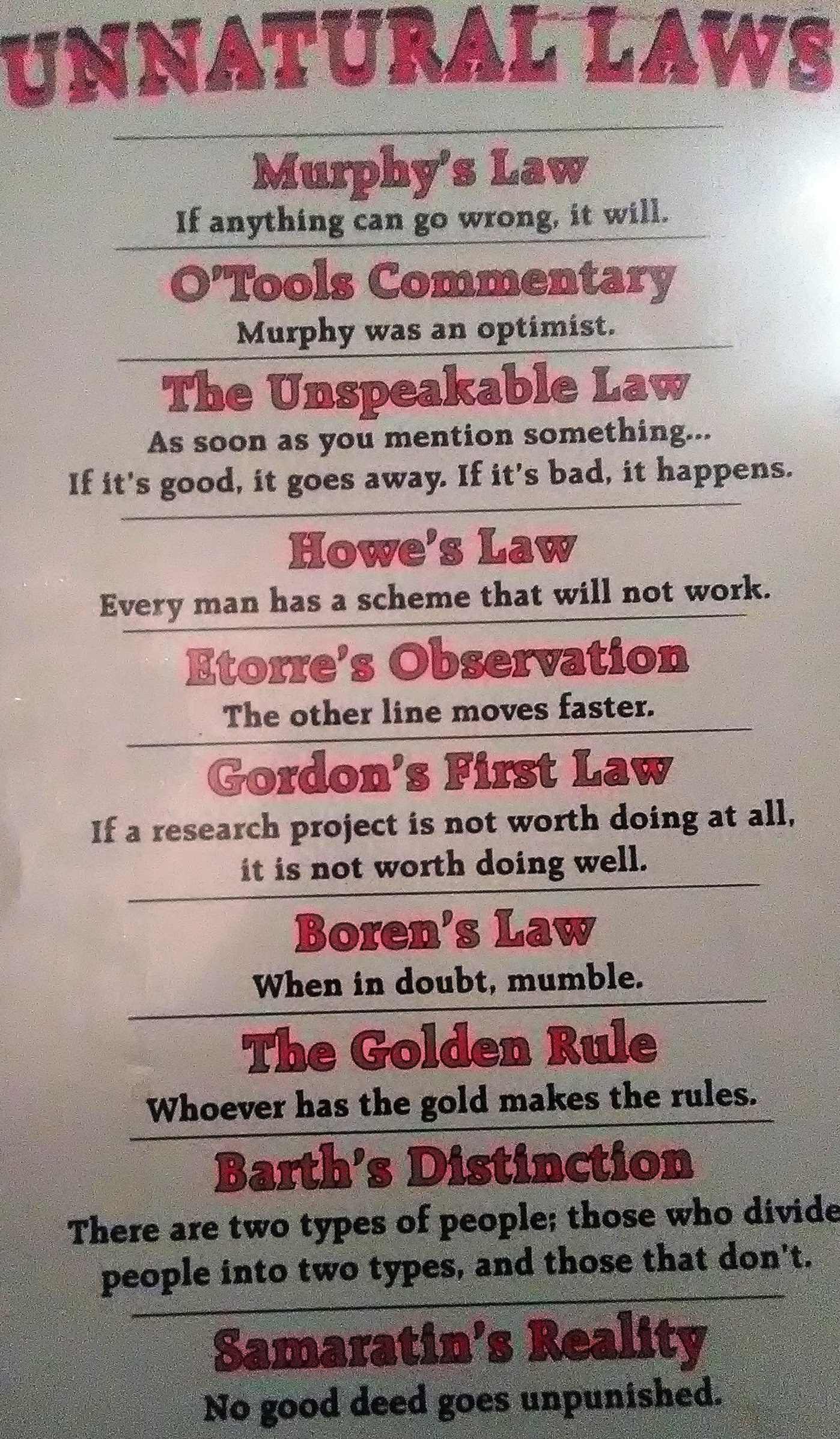 I have this sign in my workroom showing some of the more famous laws of life and I have found some more. There are a couple that overlap, but probably bear repeating anyway. Maybe you haven’t felt the effects of all of them, especially not all the time, but you know, it does happen that way.

1. Law of Mechanical Repair – After your hands become coated with grease, your nose will begin to itch and you’ll have to use the bathroom.

2. Law of Gravity – Any tool, nut, bolt, or screw, when dropped, will roll to the least accessible corner.

3. Law of Probability – The probability of being watched is directly proportional to the stupidity of your act.

4. Law of Random Numbers – If you dial a wrong number, you never get a busy signal and someone always answers.

5. Law of the Alibi – If you tell the boss you were late for work because you had a flat tire, the very next morning you will have a flat tire.

6. Variation Law – If you change lines (or traffic lanes), the one you were in will always move faster than the one you are in now (works every time).

7. Law of the Bath – When the body is fully immersed in water, the telephone rings.

8. Law of Close Encounters – The probability of meeting someone you know increases dramatically when you are with someone you don’t want to be seen with.

9. Law of the Result – When you try to prove to someone that a machine won’t work, it will.

10. Law of Biomechanics – The severity of the itch is inversely proportional to the reach.

11. Law of the Theater and Hockey Arena – At any event, the people whose seats are farthest from the aisle arrive last, and they are the ones who will leave their seats several times to go for food, drink, or the bathroom and who leave early before the end of the performance or the game is over. Those in the aisle seats come early, never move once, have long gangly legs or big bellies, and stay to the bitter end of the performance and beyond. The aisle people also are very surly folk.

12. The Starbucks Law – As soon as you sit down to a cup of hot coffee, your boss will ask you to do something that will last until the coffee is cold.

13. Murphy’s Law of Lockers – If there are only two people in a locker room, they will have adjacent lockers.

14. Law of Physical Surfaces – The chances of an open-faced jelly sandwich landing face down on a floor covering are directly correlated to the newness and cost of the carpet/rug.

15. Law of Logical Argument – Anything is possible if you don’t know what you are talking about.

18. Wilson’s Law of Commercial Marketing Strategy – As soon as you find a product that you really like, they will stop making it.

2 thoughts on “Some of the Laws of Life”