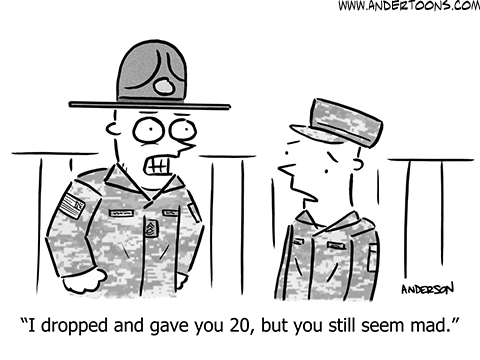 A large group of Taliban soldiers are moving down a road when they hear a voice call from behind a sand dune, “One U.S. soldier is better than ten Taliban.”

The Taliban commander quickly sends 10 of his best soldiers over the dune whereupon a gun battle breaks out and continues for a few minutes, then silence.

The voice then calls out, “One U.S. soldier is better than one hundred Taliban.”

Furious, the Taliban commander sends his next best 100 troops over the dune and instantly a huge gunfight commences. After 10 minutes of battle, again silence.

The American voice calls out again, “One U.S. soldier is better than one thousand Taliban.”

The enraged Taliban Commander musters one thousand fighters and sends them across the dune. Cannons, rockets and machineguns ring out as a huge battle is fought. Then silence.

Eventually, one wounded Taliban fighter crawls back over the dune and with his dying words tells his commander, “Don’t send any more men, it’s a trap. There’s actually two of them.”